ANDRÉIA NEIVA: RESISTANCE IN DEFENSE OF RIVERS IN THE CERRADO BAIANO

A member of MAB for nearly two decades, Andréia is dedicated to the fight for the water right, resisting, along with many others affected, to the pressure of companies that want to surround the rivers of western Bahia with dozens of hydroelectric plants. 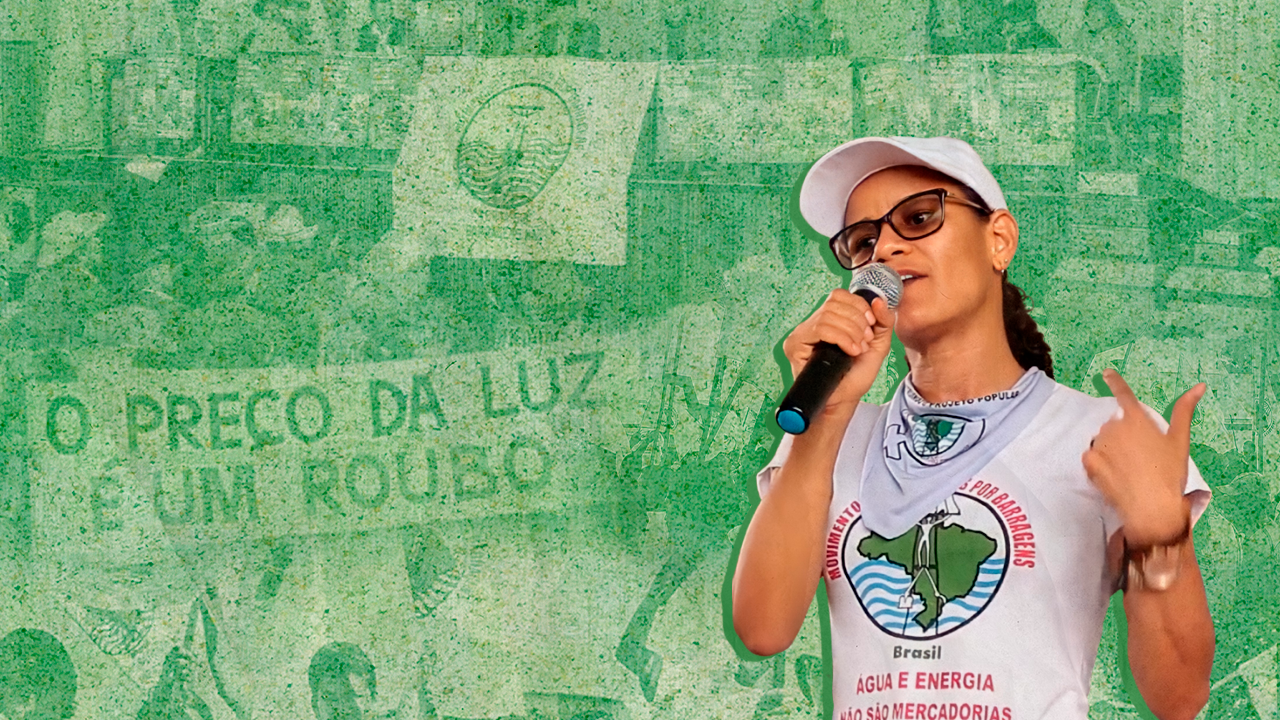 Member of the Movement of People Affected by Dams since 2003, Andréia da Silva Neiva was born in Correntina, in the interior of Bahia, where she is a public school teacher and actively fights against the actions of several companies that try to build dams in the region’s rivers. In addition, she is dedicated to coordinating the Movement in the state and became a mother recently, at 38 years old. She answered the interview questions for this piece between one care and another with little six-month-old Maria Laura.

“This task of being a mother is very challenging and I need to organize it in my head to handle it all. You can’t stop being a leader and organizer, because that’s my life choice. So there is the work of an educator and leadership, without neglecting the care of my daughter. And there comes the question of Andréia, the mother. How do you reconcile all of this?”, she asks with the honesty of someone who is still discovering a completely new world, willing to answer her questions along the way. In the midst of all this, Andréia believes that being a woman in a leadership position is a task in itself and also a learning experience.

”The first time I heard the word gender was at MAB and then I understood that some issues – that I lived at home, in the family, and at work – were related to this gender issue. So, we are within a patriarchal society and even the men who are in the Movement are subjects formed within this society. Therefore, we face some challenges with our colleagues, but it is always a process of deconstruction and construction. We have spaces to discuss, settle some matter, change what is not right, and move forward”.

Although the journey is demanding, living motherhood while dedicating yourself to the fight for social justice makes a lot of sense for the educator. According to her, the desire to transform reality has become even more intense now that her daughter is part of it. It is not just for Maria Laura and the fellow countrymen of Correntina, however, that Andréia is engaged in the fight against violations of the basic rights of those affected.

“The world is not limited to the little piece of ground we live in, the world is big and there are other people, in other places, who think as we think and who live the same problems that we live. We need to be together and articulated”, she reflects.

“So, realizing this when I joined the MAB expanded my vision and, in a way, brought me satisfaction and willingness to contribute to the struggle processes of this world, which is so unfair”, concludes Andréia.

The war for water

In the far west of Bahia, where the activist was born and raised, there are many social conflicts and the main one is the dispute over water between traditional communities and multinational companies that settled in the region to dedicate themselves to agribusiness. Surrounded by rivers and springs, the municipality of Correntina (with 33,000 inhabitants) became nationally known due to a large demonstration by residents against the Japanese company Igarashi, in 2017. The multinational aroused the indignation of the population because it collected a disproportionate amount of water for irrigation in the Arrojado River, reducing its flow and leaving riverside communities waning.

Andréia explains that exploration in the region intensified in the 1990s with the arrival of foreign farmers. At the time, attracted by the water supply of the Bahia cerrado, Japanese, Dutch, Chinese, and Americans, in addition to businessmen from the southern region of the country who were already in the region, implemented an irrigated monoculture system in the territory, contaminating and drying several rivers, streams, and surrounding creaks. In addition, they practice land grabbing, expropriating peasants lands, riverside dwellers, and traditional pasture closing communities, who have always occupied the region with subsistence agriculture and animal husbandry.

According to the MAB coordinator, the region is still disputed by electricity companies that threaten residents intending to build dozens of Small Hydroelectric Plants (PCH’s), putting at risk the rivers Carinhanha, Corrente, Grande, and Preto, the main contributors to the waters of the São Francisco River in Bahia.

”We’ve been resisting for almost 20 years! MAB began the process of dialogue with the community as soon as the hydroelectric projects were announced. When the companies arrived, we were already organized and they were unable to enter”.

In addition to the political issue, for Andréia, seeing the destruction of rivers is especially impressive due to her emotional relationship with the territory. “I love swimming, I joke that, if I could be born again and could choose what I wanted to be in another life, I would want to be born a fish so as not to leave the river”.

For this life, the dreams are bolder. Andréia wants to make more people aware of their rights every day and contribute to a less unequal society. “We seek to build a reality where people have their rights respected, have dignity, have a voice and turn, where we are people, you know? At MAB we can speak and we can listen. And this is good within the Movement because we have to build a world that is good for us and others”.

For the next 30 years of MAB, the activist has many plans. “I hope that we are at another organizational stage, already contributing directly to political, economic, and energy issues, building the revolution that we so long for. That we are already exercising popular power.”

*THIS TEXT IS PART OF A SERIES OF PROFILES OF MAB COORDINATORS PRODUCED IN CELEBRATION OF THE 30 YEARS OF THE MOVEMENT.