Tapajós river fell on hard times. The story of Joelma Oliveira’s fight in defense of Amazonia

Resident of Itaituba (PA), a militant of the Movement of People Affected by Damns fights against a model of development which, besides causing a variety of environmental and social impacts to the Tapajós, increases the indexes of violence against women. 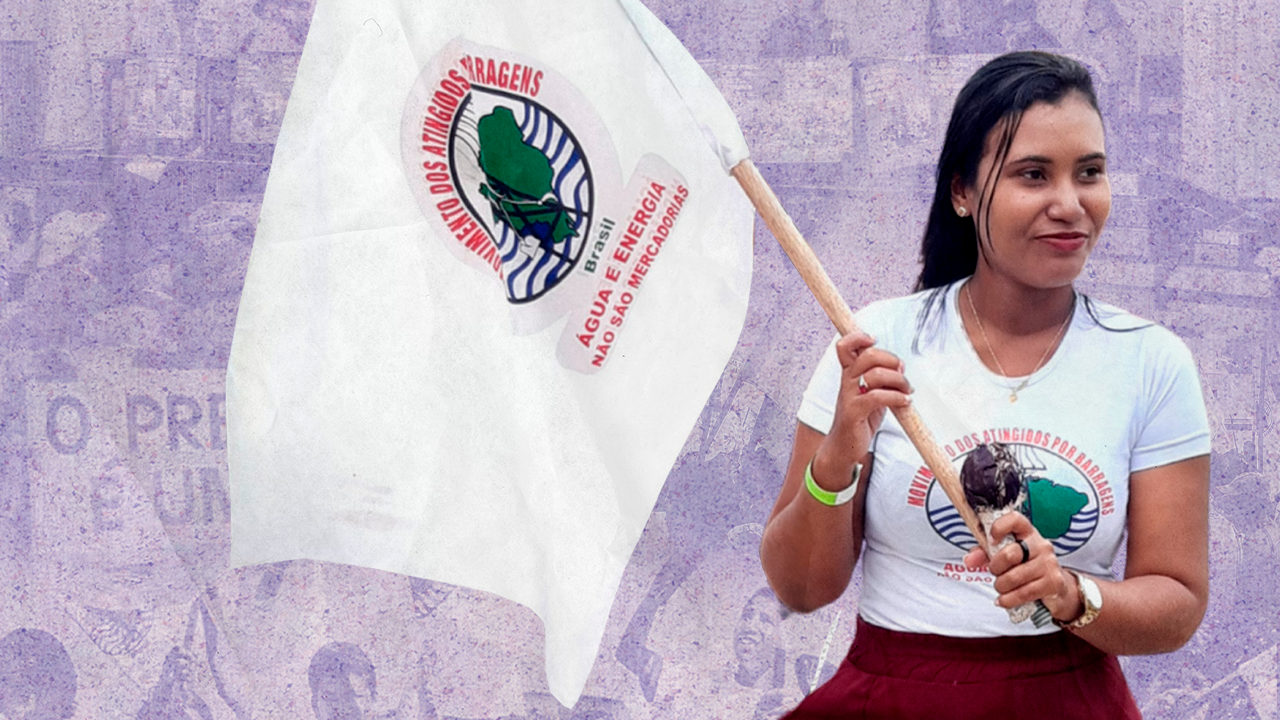 One of the most extensive rivers in Brazil, the Tapajós courses 800 kilometers from the north of Mato Grosso until the city of Santarém, in Pará, where disembogue in the Amazonas river. In its way, it supplies districts on its borders and creates beaches, islands, lago- ons, streams, and swamps which change the landscapes alongside the course of the wa- ters in the middle of the tropical forest.

Despite the exuberance, according to Joelma, the river is on hard times, at least in the district of Itaituba, where she lives. The young woman, 26, was raised watching the flow of fishermen who used to dawn in the borders of the river bringing fishes like tambaqui, piau, aracu, pacu, and aruanã.

Altogether, Tapajós counts 494 species of fish, but the resident tells that they have been decreasing in the region since the city was included in the soy rote. The rote was created to deliver the grains from Brazil to China through the north of the country since the cons- truction of Miritituba Port Complex – Barbacena, which forecasts, altogether, the setting of 23 ports along the Tapajós river – 19 only in Itaituba.

Environmental studies show that the traffic of big boats in the region makes not only the fishermen´s activities dangerous but also impacts the quality of the waters and on the re- production of fish. In this sense, the ports become a symbol of richness concentration for a few companies, mainly the foreign ones, without a local development.

Besides being affected by the Port Complex, the militant of the MAB also fights against the Hidroeletric Complex of Tapajós – a megaproject that forecasts the construction of 5 power plants along the river. The area to be flooded houses one of the main portions of na- tive forests in the country, which also impacts on the munduruku´s unities of conservation and land. Although the license given to the São Luis dos Tapajós power plant (the largest one) has been suspended in 2016 by the IBAMA, the other hydroelectric power plants are still under the phase of studies. Joelma also reminds that if the damns get indeed to be constructed, the impacts on biodiversity will be even greater.

For this reason, the resident explains that the mobilization must be constat. According to her, joining the fight against the Complex of Tapajós being a woman in Amazonia is an even greater challenge to be faced.

According to Joelma, this conscience came only after the first contact with social move- ments like the MAB. ¨We have always heard that the becoming of the damn would bring development to our region. I was too young and had no idea about was a damn. I just he- ard that good things were coming to change the economy, but I did not have the notion of how being affected felt¨ , she tells.

The comprehension of the impact of a hydroelectric complex came in consequence of the contact with other affected people in Brazil. ¨We have the case of Belo Monte right here in Pará, an example that brought several problems to the population and the city of Altamira and does not even provide quality energy to the residents”, Joelma evaluates.

The militant affirms that the Indaiatuba ports themselves have shown the impacts that big business bring.The region is being very targeted for being rich in water and mineral. So, there is a new enterprise coming all the time. While we were fighting against the damn, organizing pro- tests, they constructed the ports in our region. When we realized, there were 4 of them working and we had never been consulted. And there will be more. There are many areas deforested in the borders of the river, where they might build¨, she reports.

The soy route and the violence against women

As they arrived in the region, the enterprises changed completely the ways of life of the lo- cal population, forcing a quick adaptation of the region to the logistic dynamic of the ports. Every year, the residents of the district of Miritituba (with around 15,000 inhabitants) live with the daily traffic of 1500 trucks during the highest harvest of soy, as an example. Besi- des that, the county of Itaituba (where the district is located) had a population boom, that prioritized the basic services and brought other consequences.

Facing this amount of changes, Joelma affirms that women are the highest affected. ¨An issue that has been happening is femicide. Only this year, two women have been killed. In a small city, where everyone knows each other, this is shocking. For this reason, we have been working hard on this issue of violence against women in our actions.¨, tells the coor- dinator of the MAB.

For the increase of the violence, the own militants are in a state of alert. In Itaituba, the major part of MAB´s representats are women. ¨We go to a political act and realize that pe- ople are observing us, they already know who we are, they know our agendas and they are observing us¨, reports Joelma.

People know that we are ¨the girls who talk about violence.¨ They used to call us girls from MAB. Nowadays, they already say women from MAB. But we face prejudice for being women. We do not stop talking about it, about domestic violence, about femicide. That´s also our responsibility. ¨

To the militant, being part of a national movement with people all over the country defen- ding a cause in common with you is what gives strength to face the prejudice and the re- sistance.

¨Sometimes, it is in my head the injustice we suffer is insignificant, but when I see that amount of people, as it was in the MAB`s National Meeting, with more than 5,000 people discussing the same agenda, I understand that there are effects here in Pará, as it affects people in the south, in Minas Gerais, I realize that the struggle even greater. The MAB brings us hope of a better life, with less fear and more perspective arising from the collective fight. Taking part in the struggle is challen- ging, but, at the same time it challenges us, it boosts us.¨