On the anniversary of the crime that devastated the Rio Doce Basin, the Movement of People Affected by Dams (MAB) performed symbolic acts in Mariana (MG) and Governor Valadares (MG) charging justice 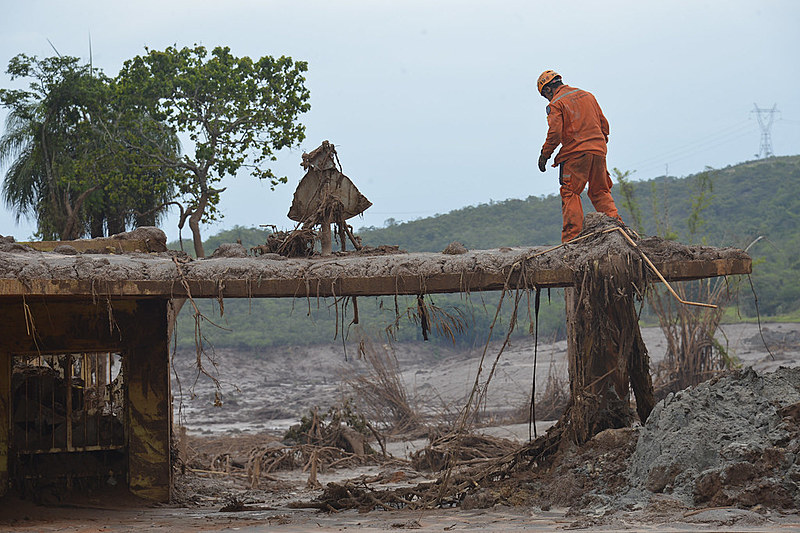 People affected by the Fundão tailings dam, owned by Samarco (Vale/BHP Billiton), met yesterday, 5, after six years of the breakup, to denounce the impunity of the companies involved in the crime that killed 19 people, caused abortion, and spilled 48,3 million cubic meters of mud with waste in the wild, devastating the Rio Doce and affecting 40 cities along the way. During the acts organized by the MAB, the participants charged the construction of the destroyed houses, the punishment of those involved, and the compensation of all people who had their way of life affected, including the issue of access to water.

The day of protests began in Praça Minas Gerais, in Mariana, with a meeting between people affected by the Doce river basin and the Paraopeba river basin promoted by MAB and Caritas – MG. During the act, those affected spoke about the helplessness of the victims of the two crimes and the failure to comply with judicial agreements related to the reparation of the environmental and socio-economic conditions of the territories.

One of the most urgent demands pointed out is the delivery of resettlements to the residents of the destroyed communities. As regards the agreements made, there are several breaches of deadlines, several of them established by the company itself or by court decision. The latter stipulated that in February 2021 the three resettlements proposed in the repair plan were to be built. Gesteira and Paracatu de Baixo resettlements do not have any of the 100 promised homes. In the resettlement of Bento Rodrigues, only 10 of the 244 houses were finished after almost 6 years. There is no deadline for the completion of the works.

Therefore, as part of the protests, yesterday there was also a visit to the community of Paracatu de Baixo and to the site of the resettlement work where the village should have been rebuilt. After six years, the only stage of the work completed is earthmoving the land. On the visit, the victims talked about the long wait of the houses and mentioned cases of depression among the elders and the loss of relatives who died before they had the right to return to their lands and their homes.

The day’s schedule also included a Mass in the district of Bento Rodrigues, the ecumenical celebration, and an act held by the MAB and the Permanent Forum in Defense of Rio Doce in Governador Valadares.

According to Leticia Oliveira, from the MAB coordination, the date of November 5 is important to report that the affected continue fighting to have their rights guaranteed. “We are doing these acts to denounce that six years after one of the biggest environmental crimes in the country there is no justice. Justice is not acting in this process, there is no one arrested, there is no one responsible for these crimes and there is no justice in the affected territories. The crime of Samarco has no repair yet. There are only 10 houses built in Bento Rodrigues. So this has to be a day of struggle so that we can give the slip that the crime of Samarco has no reparation yet. Those affected need to follow this path in search of their rights”, he said.

Jerônimo Batista, a former speaker from the village of Paracatu de Baixo, says he escaped death carrying a document and a lantern when he fled to the upper part of the community, having to carry his 91-year-old mother on his back. “Everything we built a whole life the mud took in a few minutes”. Today, he looks forward to the delivery of his new home, because he lives in the city of Mariana, but lost the lands where he cultivated food, such as beans, corn, fruit, and raised chicken, pork, and cattle.

“Here we no longer have the land to plant, we no longer have neighbors, we do not have friends, because they are all spread out to a corner”, says the affected who receives a rent value from the mining companies, but even today fights injustice to receive their compensation. “No one is under arrest. I expected the people who did this to be under arrest,” he said.

Another district resident, Elias Oliveira, refused to leave Paracatu de Baixo. After his house where he grew up with 11 siblings and that of several family members were destroyed by the rejections of Samarco, he told that he went to live in favor in the house of a sister, one of the few who remained standing in the village. Today, only he and 5 more people continue living in the community between the ruins of houses and the school that is still under the mud. Last Sunday he lost his father, who died without knowing his new home.

“It’s hard to stay here without them, without my brothers, without parents, without the community. But I can’t stay in Mariana for a minute, because my heart asks me to stay in this place. Here I take care of the church, I take care of the cemetery, and here I will stay until they build our houses. At night it’s lonely, it’s sad because you see a place where there was a community united, at night turns into a desert. We stay here with a lot of faith in God that soon our houses will be ready. In the future, everyone will return to their homes in their territories, where he was born and raised.”

Six years after the crime, the governments of Minas Gerais and Espírito Santo try to renegotiate the terms of the commitment that the mining companies Samarco, Vale, and BHP Billiton took to repair part of the damage caused by the breakup of the Dam Fundão.

Discussions on a new and definitive agreement (after the breach of the Terms of Conduct Adjustment already performed) are being mediated by the National Council of Justice (CNJ). They deal with the methodology, schedule, and proposals to speed up the repair actions today carried out by Fundação Renova. The Foundation was created by Samarco to implement environmental and socioeconomic programs with actions of health, public education, tourism, and infrastructure that should be implemented to compensate for the damage caused to the affected cities in the Rio Doce trough.

According to the MAB, however, Renova, in addition to not executing the actions for which it was created, has acted to deepen the injustices already practiced in the territory. Therefore, the Movement has defended that those affected need to be heard in this process of agreement on the main damages they have suffered and the actions they consider a priorit

“The Reopening Table in Rio Doce mediated by the National Council of Justice (CNJ) has not yet made room for real participation. Two public hearings have already been held, but no real impact on the discussions, which shows that the repair model remains the same after 6 years without great results and that there is no openness for changes. Injustice towards those affected continues to be the consequence of this model of reparation”, says the MAB coordination.

A DEADLY RING OF COAL: VALE’s poisoned gift to Mozambique

15 years ago, when the Mozambican government signed the contract with VALE, almost everybody in Mozambique believed that coal would develop the country. This investigation exposes part of the destruction that VALE Moçambique is preparing to leave behind now that it has announced an agreement to sell its projects to Vulcan Minerals for US $270 million

The projects represent a huge risk for socio-biodiversity and for the planet’s climate due to the emission of methane. During COP 26, more than 100 countries pledged to reduce gas emissions by 30% until 2030