“Nobody goes home until we get changes” affirms US Black activist

Robert Robinson, member of the Take Back the Land movement, comments on the recent protests, the demands of the American black people and the challenges facing the pandemic situation of the new coronavirus and the presidential elections in the United States, scheduled for November this year 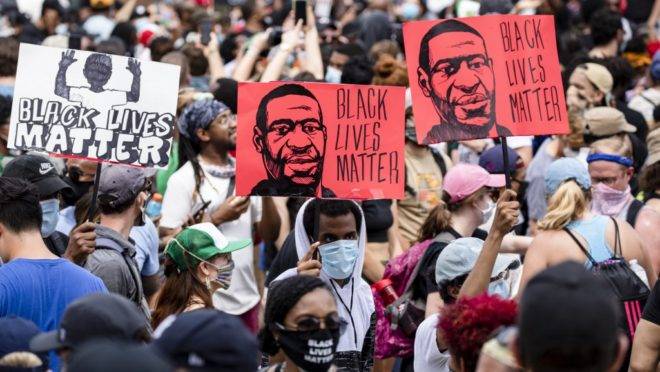 The brutal murder of George Floyd by a white policeman in the United States on May 25 sparked a wave of protests inside and outside the country against racism and police violence. A theme well known by the population of the peripheries of Brazil and around the world.

The revolt of the black population ended up making news all over the world, reminiscent of the great marches for racial equality led by the Black Panther movement that, in that same country, brought about the demand for an end to racism in the years and gave visibility to the racial cause.

In an interview on the MAB website, Robert Robinson, a member of the Committee in Solidarity with MAB and MAR in the United States, a member of the Take Back the Land movement and a volunteer with the National Initiative for Economic and Social Rights (NESRI), comments on the recent protests, demands of the black American people and the challenges facing the pandemic situation of the new coronavirus and the presidential elections in the USA, scheduled for November of this year.

How do you assess the growth of racial protests and strikes in US and the world in recent days?

My assessment is the killing of George Floyd was the breaking point for many people of color in the US. We saw folks rise up after Ferguson but things calmed down after a week. This particular killing of an African American man came during a worldwide pandemic that disproportionately affected people of color. The loss of jobs during the pandemic, folks unable to pay rent and people of color dying because of a lack of healthcare.

What are the main flags of this movement? Do they have any relations with the black and Afroamerican historical movement’s in the United States?

The main flags of this movement is it’s foundation of young people that formed the Black Lives Movement. There is an understanding of the historical Civil Rights Movement and the gains made in the past. I also think the current president Donald Trump’s rhetoric and his constant undermining of the only African American president Obama fueled the fire inside of people to the point they’ve said “we’re tired and we won’t take it anymore”. I also believe that added to the issues already mentioned is economic injustice that has not only affected African American but especially allies like you white college students.

Economic issues, such as the questioning of the capitalist system and the derived inequalities of this model are on the agenda of these manifestations?

With the election of a young Latin-X, Alexandra Ocasio-Cortez who identifies as a democratic socialist to the US Congress, the issue of economic injustice, the capitalist system that has continually held back people of color and only used them for labor to produce wealth for the one-percent is part of what is fueling this movement.

We know that the new Coronavirus pandemic has opened up, or raised contradictions in our unequal society. In your opinion, is there a relationship between these protests and the pandemic situation we are currently experiencing?

In New York City, our elected officials were forced to reveal publicly in April data that showed the people most affected by the coronavirus came from low income communities of color. The same communities that are affected by substandard housing, high rents, lack of sustainable wage jobs inadequate healthcare and almost any other social injustice one can name.

How do you evaluate the attempt by the US government and the world hegemonic media to try to criminalize the popular movement, labeling them violent rioters?

It was very clear from the beginning the rioters and looters were a small group of people that had nothing to do with the organized larger movements. Media here were eventually forced to separate the issues and label the rioters and looters as opportunists. However, I will say this if you continually hold down people and keep them economically depressed at some point there are those that would become opportunists. An example of this is the many supermarkets that were looted. I believe because that particular looter or their family were food deprived. The pandemic left people in this country suffering from hunger.

How can these demonstrations impact the US elections, scheduled for November this year? (Political situation)

Many of the critical thinkers in the movement, and I hope it’s OK to say this, I am a critical thinker are starting to ask “what does a post-pandemic US look like. Will there be a loss of jobs, people evicted from their homes and people drowning in debt? Many of us believe this to be true. We need to vote for a new leader. We’ve seen and experienced the Trump administration. His fascists ways. We must get out and vote. While Biden isn’t the best alternative, he is better than Trump. We must register our community members to vote and make sure they get to the polls in November.

Nobody goes home until we get changes!

The assassination of George Floyd was a crucial turning point in the United States. The video seen by people from all over the world provoked outrage, especially among young people. We took to the streets in the past, but the events that led to past actions (the police murder of African Americans) and the footage seemed to have fallen on deaf ears. The persistence of the protests this time, the many cities protesting and a president who ignites the flames of indifference, promoting white supremacy and fueling his base, has led to strong and powerful actions that we are witnessing today. As an African American man, I am honored by the outpouring of solidarity from communities around the world and particularly honored to receive messages of solidarity from MAB and MAR. As I write this message, there is a big march in Washington DC, in front of the White House. I just took a break from a big meeting in New York City. Nobody goes home until we get changes!

COLLAPSE: THE SITUATION OF DAMS IN THE UNITED STATES

My work with MAB and conversations with people affected by dams around the world made me want to investigate the following questions: what is the state of the dams in my own country, the United States, in 2020? Do we have concerns about their safety? Could there be a dam break here? Can what happened in Brumadinho happen here? Who controls these dams, and who “benefits” from the energy?