It is time for organization and struggle at Rio Madeira

After the historical flood in Rio Madeira, thousands of families were displaced. The two mega hydro-power plants of Santo Antônio and Jirau left a trail of destruction in the region. […]

After the historical flood in Rio Madeira, thousands of families were displaced. The two mega hydro-power plants of Santo Antônio and Jirau left a trail of destruction in the region. Since the beginning of the flood people affected have mobilized and presented proposals for ensuring their rights. Without concrete response, the families resisted the relocation to a concentration camp in canvas tents and occupied the Santo Antonio power plant to charge solutions of the government and the electric companies

Popular Assembly of those affected

In Porto Velho, April the 17th, at the Mercado Cultural, front of the Government’s House, MAB (Movement of People Affected by Dams) organized a Popular Assembly of People Affected by dams and floods of the Madeira River, with the lemma: for land, house and work. This assembly had the participation of 600 people affected.

The assembly had the objective to advance the organization of those affected and their agendas, denounce to society the serious human rights violations at this historic flood of the Madeira River, and also the whole violent process of implementation of the power plants Jirau and Santo Antonio in Madeira.

For MAB the hydroelectric reservoirs were undersized, as well as its backwater curves, the dams are accumulating large amounts of sediment, which leads a larger area of floding. Besides, both companies over-accumulated water (more than permited by its license) in order to increase its profits (more water volume more potency for the turbines, more energy generation), putting society at risk and violating the rules of operation.

Before the construction of both dams, several allerts were made, including by the researcher Phillip Fearnside of the National Institute for Amazonian Research (INPA) and the Indian consultant Sultan Alam, both pointed to errors of the projects, however were ignored.

While thousands of families lost everything they had, the eletric companies have been winning high proffits with the power generated. Only the bank BTG Pactual had a profit of 350 million Reais in January and February 2014 due to the speculation of the energy produced in Santo Antonio, which is being sold for 822 Reais/1,000 kWh, ten times higher than the price set in the auction. This account shall be transferred to the Brazilian people with future increases in rates of domestic energy bill.

Members of other social movements of Via Campesina also participated as the Movement of Landless Rural Workers (MST) and the Small Farmers Movement (MPA) in solidarity with the struggle for ensuring new lands, housing and dignified treatment for those displaced.

The chancellor of the Federal University of Rondônia (UNIR), Berenice Tourinho announced the support and commitment of the University to the struggle of people affected by dams and said they will strive with the Public Ministry for a new Environmental Impact Study, which will be done according to determination of the Federal Court, indicating the experts by the prosecutor and not indicated directly by the companies.

Those affected by the hydro-power plant of Samuel, on the Jamari River, affluent of the Madeira River, told how they did not had their rights guaranteed over these 30 years. Families of Madeira and Samuel are united in one struggle for land and dignity.

On the 18th last month families mobilized in march front of the Government’s House to demand measures after the flooding, like reconstruction of affected communities, resettlement at secure place and support to productive activities. Also a protest was held in front of Santo Antônio Energia’s office (SAE) to repudiate the imposition of Civil Defence in placing those displaced in insalubrious canvas tents installed at the exhibition park of Porto Velho.

Most families which were in shelters were and are taken to the tents at the Park, even with resistance. Before the so-called this camp had been installed, alternatives such as hotel accommodations, rental assistance and shelter at disabled public buildings were presented, but these proposal were not considered. Not only the city and state governments, along with civil defence were advised, but also the ministers of National Integration, Francisco Teixeira and the General Secretariat of the Presidency of the Republic, Gilberto Carvalho, after a meeting held March 5th at the Foreign Ministry (Itamaraty).

After the assembly, circa of thousand of dam affected people occupied the work-site of Santo Antônio and charged a meeting with the directorship of the consortium within 10 days, as agreed with the sustainability coordinator, Alexandre Queiroz. For MAB the negotiation must be intermediated by IBAMA and the General Secretary of the Presidency. 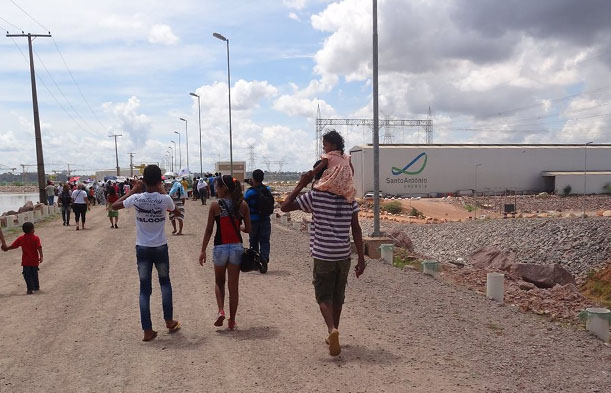 IBAMA’s superintedency office in Rondônia was occupied by those affected on February 28, and a meeting was agreed regarding the several problems such as the impact on fisheries and the precariousness of resettlement. The IBAMA agency would work to articulate an agenda with representatives of the consortia as soon as possible. But until now there have been no responses.

Last year December 6, MAB met with the General Secretary of the Presidency, the Ministry of Mines and Energy and the consortia of Santo Antônio and Jirau in Brasília to discuss the demands of those affected. Among these issues, we have presented images of the altimetric mark (of the reservoir) near the settlement of families in Jaci Paraná. It was indicating 74.7 meters*.

This denounce submitted to the government in Brasilia and directors of Santo Antonio Energy (SAE) reveals that MAB was already seriously concerned with the effects of the reservoirs of power plants in Madeira. In the beginning of the dam it is not fully presented the impacts of the reservoirs. But over time it is visible due to its filling, the sediment accommodation and the operation of the hydro-power.

Many families were displaced in the beginning of the construction and with the time more families have being affected by the lakes of the dam and its increasing impacts. This is the case for example, at the Joana dArc settlement. The licence of the dam did not even point correctly to the real number of families displaced. And this number is increasing due to the elevation of the water table and the subsequent contamination of drinking water.

January this year was also held a meeting with the government and the companies in Brasília. This meeting was to give continuity to negotiations in Porto Velho, because of the urgency to address these problems and to avoid more complex situation with the next flooding of the river. In February without any answer, the highway BR 364 was blocked in Jaci Paraná, and three protesters were prisoned by the repression of the Military Police which also used rubber bullets against the inhabitants. Also at the pacific occupation of Santo Antonio the police used once again its force and shot people with rubber bullets.

Even with the criminalization of the movement, the struggle of those affected is legitimate and permanent. The movement will not be intimidated by the military apparatus. We demand that the government convokes these companies to pay their social debt to those affected instead of putting the police at service of this transnational companies and putting families at risk.

*According to Resolution No. 167 of May 14, 2012, the National Water Agency – ANA decided that the operation-of-river reservoir respects the maximum NA Jaci – Parana 75 meter for flows up to 52,775 m³ / s corresponding to the TR of the last 50 years in the Madeira River.