The Brazilian Institute of Applied Economic Research (IPEA) released on this Monday (June 5) the Map of Violence of 2017. According to the map, Altamira (in the state of Para) […] 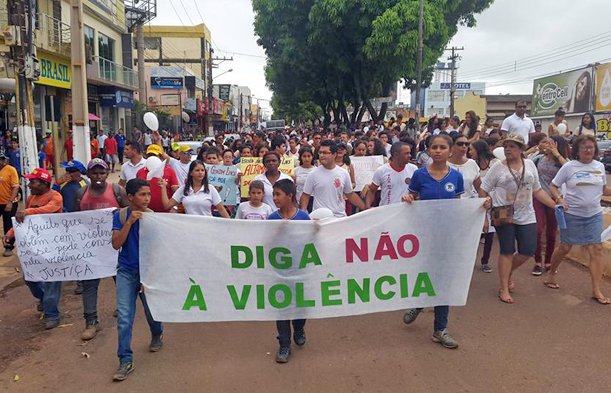 The Brazilian Institute of Applied Economic Research (IPEA) released on this Monday (June 5) the Map of Violence of 2017. According to the map, Altamira (in the state of Para) is the most violent municipality of Brazil. The research used data from 2015, peak year of Belo Monte hydro-power dam construction. According to the study made, in partnership with the Public Safety Forum, the municipality has the highest rate of homicides and violent deaths of undetermined causes of all Brazilian cities of more than 100 thousand inhabitants.
There are 107 violent deaths per 100,000 inhabitants, almost four times more in comparison to the national average (28.9 deaths per 100,000 inhabitants), and 10 points above the second violent city of Brazil, Lauro de Freitas, in Bahia, with 97.7 deaths per 100,000 people.

The result of this research is not a surprise for the people from Altamira. Since 2010, when the prior license of Belo Monte was released by IBAMA (federal environmental institute), started an intense migratory flow to the city. The so-called “conditioners” of the licensing, a set of measures planned to prepare the region for the dam construction and the growth of the city, started very late. Meanwhile, Altamira saw its population grow from 99 thousand inhabitants to more than 150 thousand in three years, and chaos took over the municipality.

In the peak years of the dam construction, between 2012 and 2015, when the hydroelectric plant had almost 30 thousand workers, the violence rates reached it’s peak, especially homicides with firearms. And in this process the greatest victims were working-class youth. By 2014, the Brazilian Forum on Public Safety had already published a study in which Altamira was the third municipality in Brazil with the highest index of youth vulnerability due to violence. Data from this study are from 2012.

Like all megaprojects, Belo Monte repeated historical human rights violations in the process of building dams in Brazil, such as the denial of participation by communities in plans to repair impacts, compulsory displacements, destruction of traditional ways of life, breaking of community ties, among others. 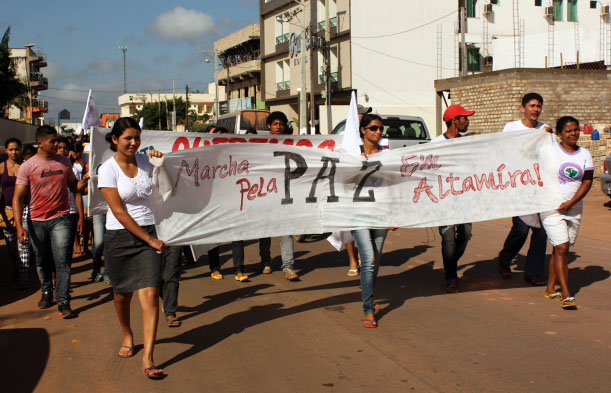 March for Peace, organized by MAB in 2014 in Altamira

Within the licensing studies for Belo Monte’s dam construction, the possibility of increase of violence and crime as consequence of the dam construction was ignored; Although, recent prior dam projects build has been a clear example that, for example: Jirau and Santo Antônio, in Rondônia”, affirms Fabiano Vitoriano, of the Movement of People Affected by Dams (MAB), who’s was born and lives in Altamira.

Without any action foreseen by the measures of the conditioners, Norte Energia, consortium owner of the hydropower plant, signed a term of technical-financial cooperation with the Public Safety Secretariat of Pará. Norte Energia should make feasible the implementation of actions against crime and violence, accounting for an investment of 105 million Reais. Social movements denounce that almost half of this resource has been used for the purchase of a helicopter that is not even used in the region.

“It is impossible to portrait the violence of Altamira without relating to Belo Monte’ dam; which changed the social dynamics of the city without correctly dimensioning its impacts. In this process of generating wealth for the few, many lives were lost,”says Fabiano.