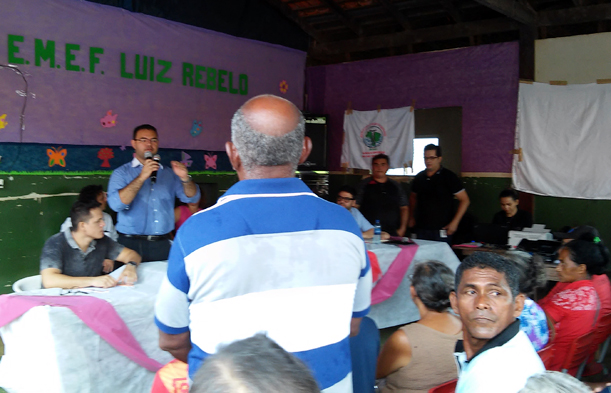 The Canadian mining company Belo Sun plans to extract gold from the region of Volta Grande do Xingu and bought public land without consulting the Federal Institute for Colonization and Agrarian Reform  INCRA. The denounce, was made by the INCRA during the public audience held by the Public Ministry of the state of Pará (MPE), due to the demand of the people affected by the open gold mining projects in Brazil.

According to Danilo Oliveira, from INCRA, Belo Sun bought land directly from the leaseholders, from areas belonging to the federal State, which is illegal. After this, we sent official letter of notification to the company three times , but the company did not reply, besides, the company did not give the GPS coordinates to localize the areas which will suffer direct impact with the open mine pit, and until today it’s not precise the impacts that this area will suffer, added Danilo.

The activity happened on February 24th at Vila da Ressaca and gathered circa 500 people. According to Ruy Lamim, from the Public Ministry of Pará, the goal of the audience is to hear from the families the impacts of the last three years since the arrival of Belo Sun in the region of Volta Grande do Xingu.

Belo Sun is a subsidiary of a Canadian company that belongs to the financial group Forbes & Manhattan Inc, which plans to extract at Volta Grande do Xingu circa 108 tons of gold during 17 years. This will change completely the environment and cause several impacts. Belo Sun plans to build two giant pits only a few meters away from the Xingu river, one with 1.1 thousand meters long and 540 meters deep and another of 2.9 thousand meters long and 400 meters deep. The main worry of the people affected is the seize of the tailings reservoir. Belo Sun plans to build two dams to contain circa 92 millions cubic meters of tailings. In comparison, the tailings of Samarco in Minas Gerais which flooded into the Doce River contained 62 millions cubic meters, enough to kill 630 km of a river. In addition to this great volume of waste, is the large amount of cyanide that the company will use in ore gold separation processes. In case of leakage, this material will go straight to the Xingu river and can reach even the Structures of the Belo Monte dam.

“This Canadian company comes to Brazil and disrespects the law and the people. Belo Sun is criminal and we can not let this licensing process move forward, if the company is disrespecting federal organs imagine how the company will treat the affected people” sayd Jackson Dias, activist of the Movement of People Affected by Dams (MAB).

The resident of Ressaca and MAB’s activist, José Pereira Cunha denounced that the miners are forbidden to work because of the company. “Today we live oppressed by Belo Sun, we are suffering criminalization”. Francisco denounced that “Belo Sun took our jobs and now tries to criminalize us.”

“Who will pay these last three years that the miners were forbidden to work at the mine?” asked Iury Paulino, of MAB.

The small farmer Francisco Edson de Sousa reported that “before I sold a lot of chicken at the village of Ressaca, but now I can’t sell even one and I have to sell cacau in Altamira to survive.

The small farmer Roosevelt Pereira, from the Rural Workers’ Trade Union of Anapu, denounced that no public consultation has been held and argumented against Belo Sun this project is not sustainable for the families, it’s only sustainable for capitalism.

At the public audience participated indigenous and riverine people, fishers, small farmers and small gold diggers. The project of Volta Grande is 10 km away from indigenous territories. Even though these areas are not being considered in the environmental impact report of the mining company;

Bel Juruna, of the indigenous village Muratu, said that their ancestors live in the area for more than 300 years and that the absence of FUNAI and the Federal Public Ministry at the public audience to guarantee the indigenous rights was a disrespect. She said that the indigenous of Volta Grande do Xingu are making their own protocol of consultation since Belo Sun is not considering these populations as affected.