Circa of 800 fishers blocked the entry to one of the work-sites of the Belo Monte’s construction this Wednesday (17). The objective is to demand the compensations for the fishing […] 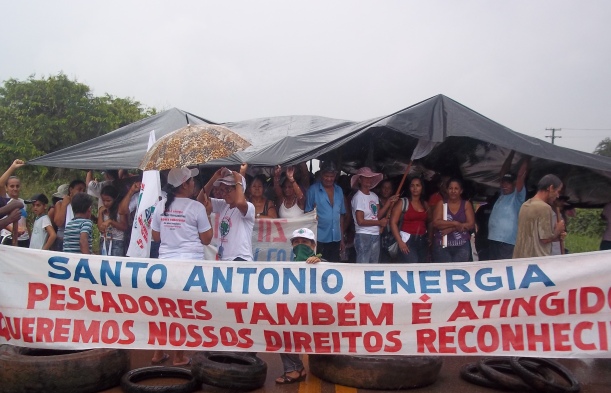 Circa of 800 fishers blocked the entry to one of the work-sites of the Belo Monte’s construction this Wednesday (17). The objective is to demand the compensations for the fishing activity on the Xingu river, which will be impaired due to the construction of the dam.

Among the demands are the construction of harbours for embarkation and disembarkation of fish, compensation for the time of impediment of fishing and for all those people removed from their areas, warranty service, among others. At this activity there is participation of fishers of the municipalities of Altamira, Vitória do Xingu, Souzel, Porto de Moz and Gurupá. The action has the support of the Movement of People Affected by Dams (MAB), Levante Popular da Juventude, among other organizations.

The Fishers met with representatives of Norte Energia, the owner of the dam, before the occupation. However, as the company’s practise, it sent professionals which have no decision power. Due to the useless of the meeting, the fishers decided to block access to the construction site and remain there until a satisfactory answer to their agenda.

We are prepared to stay here for days if that is necessary, affirmed Pedro, one of the fishers, resident of Altamira. Last year, the fishers passed two months encamped in one of the work-site areas, however there were no advances on the negotiations. The company even affirmed that there is no major impacts at the fishing.

Also handmade potteries workers of Altamira participated at this movement, because their activities will be extinct after flooding the areas of the city of permanent clay soil. In addition, many fishers and potters are residents of flooded areas of Altamira and are being evicted from their homes by the Norte Energia without a fair proposal of resettlement.